Per Enflo  Math or Music?- Yes, Math AND Music!

In the first days of January 2001 there was breaking news from Australia:

A human fossil had been found, with modern anatomy but mtDNA quite different from ours. >>BBC

This was predicted by my model.

Svenska Dagbladet decided to publish Annika Jensfelt's article on my model - set for publication in February 2001 - as quickly as possible, and the article took up the major part of the science section in SvD on January 14, 2001.

"Neanderthals are not counted out

Read the article in Swedish 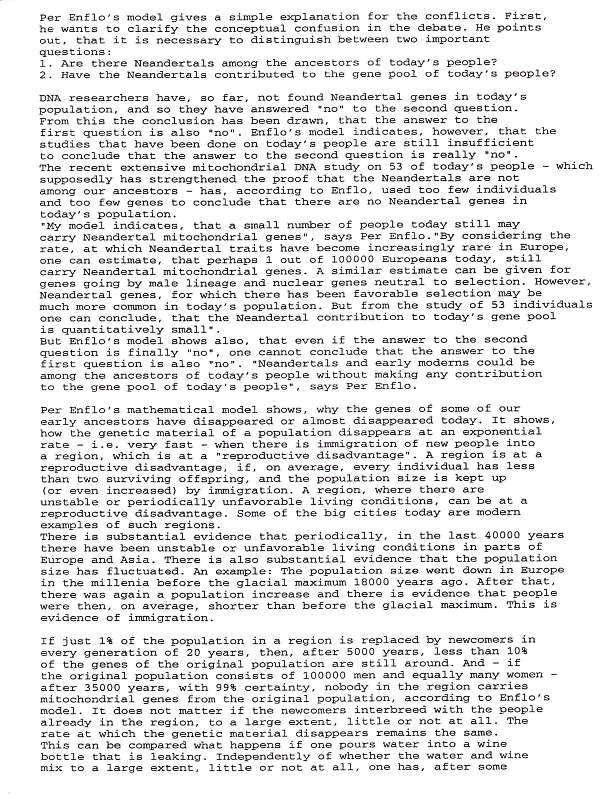 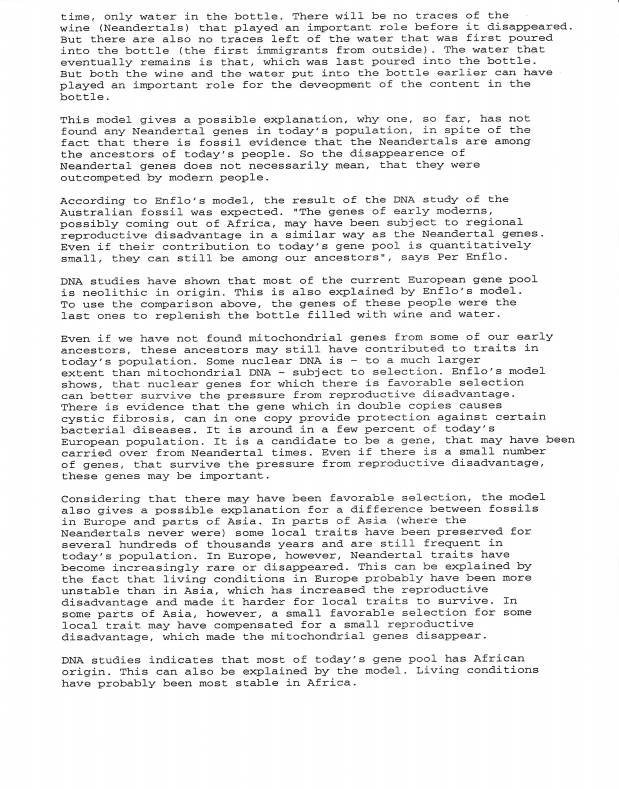 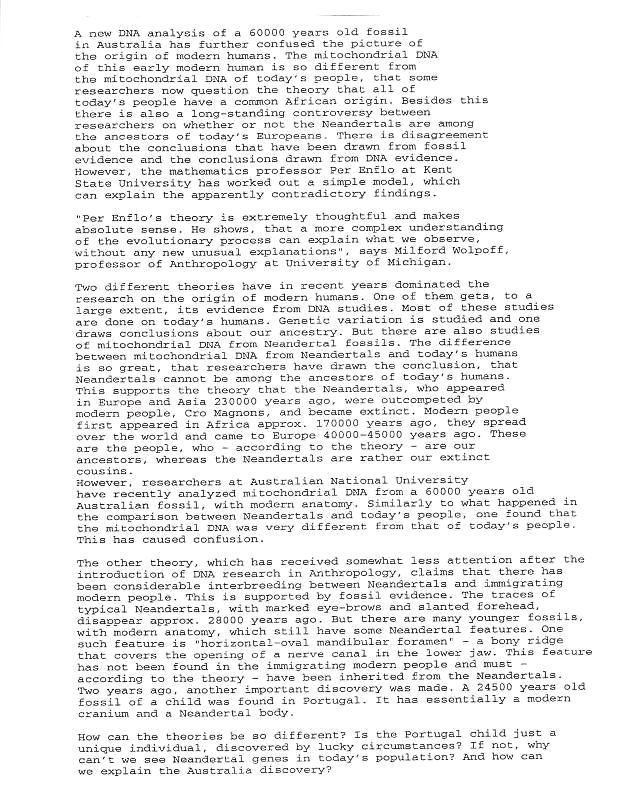 Here is the background

In the mid 1990:s, there seemed to be a contradiction between DNA data and some fossil data concerning the Neandertals and how they are related to modern humans. On one hand, there was strong evidence that no Neandertal mtDNA (mitochondrial DNA) was around in today's human population. And there was quite a bit of evidence that no Neandertal nuclear DNA was around in today's population, either.

On the other hand, there was fossil evidence that some Neandertal traits - some well-known ones are H-O mandibular foramen and suprainiac fossa, documented by David Frayer - were around in Early European Moderns, with decreasing frequencies as time passed, and were not around in Early Moderns in other parts of the world.

The attempts that had been done to reconcile these seemingly contradictory data, did not seem convincing to me. Random genetic drift or mixing a large and a small population was not enough to account for so much disappearance of Neandertal genes. And suggesting that the mitochondrial clock was calibrated incorrectly could not account for the fact that Neandertal mtDNA was quite different from ours. (I should mention here that in 2010, the Neandertal genome project has finally shown that 1-4% of today's human genes outside of Africa are Neandertal)

In the entire year 1998, my largest research effort was to try to reconcile Frayer's convincing evidence for substantial interbreeding between Neandertals and Early Modern Europeans with the convincing evidence of a complete disappearance of Neandertal genes in today's human population. For this, it was necessary to find some natural phenomenon that would lead to a disappearance of Neandertal genes, which was faster than the disappearance through random genetic drift - even under a scenario of substantial interbreeding between Neandertals and Early Modern Europeans. In the end of the year, I found that some discrimination phenomenen, when forming couples, could lead to an exponential disappearance of Neandertal genes. But such a phenomenon could probably only last for a few generations and that was not enough. In my attempts to strengthen this argument, I found, a month later, that, in regions where the populations do not reproduce themselves fully, but are dependent on immigration to keep up the population size, the genetic material disappears exponentially fast, i.e. much faster than given by random genetic drift. And if a region is dependent on immigration to keep up the population size - i.e. since the living conditions in the region vary over time - this is something that can go on without time limit.

So, assuming that Europe had been such a region for the last 60000 years, there was now a simple explanation for a complete disappearance of Neandertal genes, even under a scenario of total and random interbreeding between Neandertals and Early Modern Europeans.

And this phenomenon would also explain Frayer's data, that Neandertal traits had been around in Early Modern Europeans with decreasing frequencies as time passed - and not around in Early Moderns in  other parts of the world. And it would also explain why most of today's European gene pool is from Neolithic time - the dependence of immigration to keep up Europe's population size was there long after the disappearance of the Neandertals.

This model would also predict, that one might find a human with modern anatomy, but with mtDNA quite different from ours. Such a find had not been done in 1999.

In the fall of 2000, a journalist, Annika Jensfelt, wrote an article about my model and presented it to the two major Swedish newspapers, DN and SvD. DN was not interested, but SvD expressed interest in publishing it - given that the model had some endorsement from a leading researcher and that it was going to be published in a scientific journal. The model had a strong endorsement from the leading Anthropologist Milford Wolpoff at Univ.of Michigan. And a simple outline of it was going to be published in Am.J. of Physical Anthropology. So A.Jensfelt's article was set to appear in SvD in February of 2001. Because of the news from Australia in the beginning of January 2001 the article appeared already January 14.